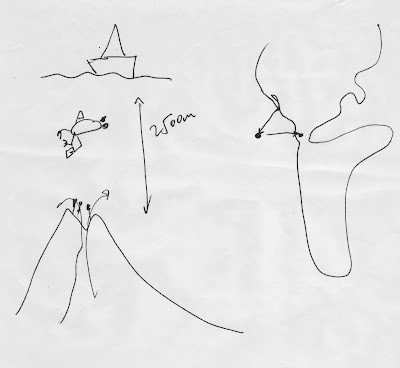 The first thing I was surprised about is that there are no seats in Alvin. I always had pictured it as those big bridges of spaceships as Star Trek's Enterprise. Instead you sit (mostly lie) on the floor, on some pillows. The pilot has a small box and he is sitting on top of it in a kind of yoga position. He is very busy and focused during all the way down and during the time on the bottom. 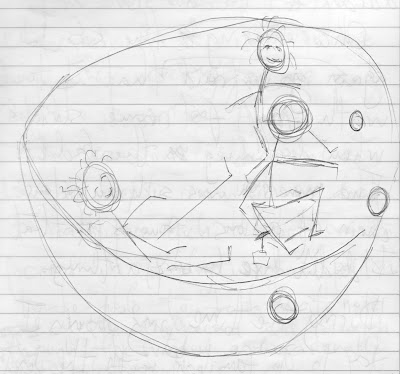 But let’s go back to the beginning. In the early morning when I woke up my main concern was to go to the toilet (I went three times) to try not to have to go in the sub. It is very important to choose the right clothes. No belt, no ring, no watch. Nothing can scratch the window glass from inside by accidental touch.

Once entering the sub I got afraid again that I touched some switches with my foot when descending the ladder. The immersion was such an intense chain of actions done by the pilot that I didn't dare to say a thing.

During the time going down I tried to get familiar with the digital photo camera, and I discovered that I hardly can make pictures well in focus or not moved. That will become worse down at the bottom.

I’m there one of the two observers. As Bruce said in the preparatory meeting, we are part of the sensors of Alvin.

The water column is dark and we have no lights during the descent. Finally we reach the bottom. I’m focused in finding the best position to be able to both write notes on the dive record and to watch through the window and occasionally to make photographs.

I see my first target, an orange, brilliant eyed shrimp, which I make shots with my camera repeatedly with not very good results. For whatever reasons the photos are moved or out of focus, or both!

I have also the control of an external video camera for recording. So I play with the controls until I’m familiar with. There is one to move it up to down and from left to right, and another one to zoom. It’s easy to loose the position and not to know where you are pointing at, so the best is to move it down and left until I find the basket. 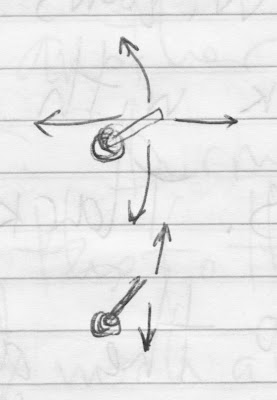 I have to say that I had much fun with it. I looked for crabs, and even I managed to record a fish zooming in and out over it while moving.

So here I am down in the bottom of the ocean and we three down here have tasks to do. We pick up and deploy stuff. And before it we have to find them, that stuff and the right places.

We don't see much. Only three little windows and around us walls of rock with strange shapes and patterns. Mark, our pilot, drives us to the desired place, an old spot of hydrothermalism known as Sketchy. Once we are there Monika is a little disappointed. Hydrothermalism there has ceased after 2006's eruption and everything is dead. Those sponges and baby traps we wanted to deploy there will need to be placed at other places.

Next stop is another vent known as P-Vent. During the transit from one vent to the other we have to pay much attention through the windows, and look for "markers" that are floating lids of buckets labelled with numbers or letters, placed sometimes for other people, and luckily also ours.

That made me feel really like in a video game. 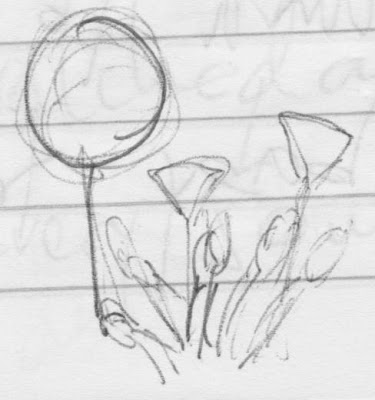 We saw ours and started the tasks. Alvin arms are strong, but they only have four fingers. Monika wanted a rock with tubeworms, but the box in where it had to be placed was a little smaller than those rocks Mark managed to catch. He tried and tried to break them and finally he could catch one who fitted in the box.

The other two things to do was measuring temperature and to deploy the new sponges and baby traps.

We were five hours doing so. Monika and me we ate our sandwiches and the chocolate bar during that time. Mark didn't eat until everything was successfully done and we were moving up to the surface.

During the ascent I remembered that there must be a certain depth near the surface where the temperature suddenly rises up fast. So Monika and me we watched and recorded the temperature every 50 m in the last 400 m, to catch the "thermocline". Finally I could check that is existing and is not only something you hear at class from teachers or written in books. That day, in the small spot of the Pacific Ocean where I dove, at 38 m deep there was the thermocline. 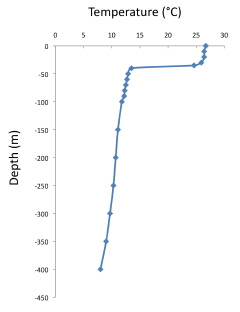 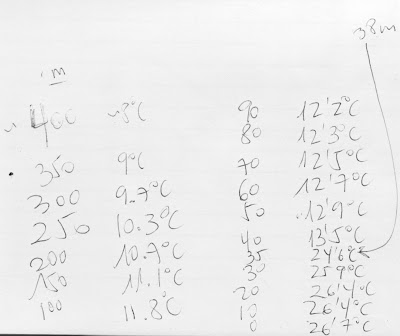 Budget cuts are not necessary for the spanish science because...

... we still don't know wether the final destiny of the universe is to return to a big crunch or to dissolve in the infinity.
... this depends on the total amount of matter and energy of the universe. Which is unknown because we have not found the most of it.
... our current explanations of large scale processes do not fit with those of small scale processes.
... it is unknown how matter, energy and information converge to something we call LIFE in this rolling stone.
... we do not know if this life is only happening here.
... depending on how we deal with it of even against it, we do not know what will be with this life here.
... the concept of species lacks a clear definition when applied to archea (known before as archeobacteria) and bacteria. They are the two most abundant of the six kingdoms that classify life on earth.
... a little part of the species is described of the remaining four other kingdoms (animals, plants, fungi and protists).
... it is just incipient the description of the interactions between species. Life systems characteristic phenomena as cooperation and networking patterns are newly understood, despite the dominant vision of competence and predation.
... within living beings one particularly misunderstood is that one that has two legs.
... is not well understood how the systems of maintenance of life of this planet are being disturbed by him.
... in Malaga it is not known the number and the land structure of the small rivers and brooks. They are being constructed, put in tubes, covered with asphalt, and their river basins are being deforested because the suburbanization process.
... the beaches in the city of Malaga are destabilized.
... the fishing ground of the bay of Malaga is collapsed.
... the economics are confused with the chrematistics.
... the appropriate technology can make life easier.
... science follows art.
... there can be interactions between the young people and all those little creatures that are trapped between the walls of the offices in the universities. And sometimes sparkle.
Publicado por feministo en 11:29 No hay comentarios: